Home › Credentials › Christmas is for Giving and for …….. Copying!

Christmas is for Giving and for …….. Copying!

Well, customers have breezed through Halloween, Thanksgiving, Black Friday and Cyber Monday and are careering towards the festive season with retailers worldwide cheering them on. The year is being filled to the brim with special days wooing shoppers to open their wallets. We blame The Three Wise Men – gift-giving at Christmas has got serious history, whereas Singles’ Day in China (coming to a market near you!) emerged in China in the early-1990’s and Cyber Monday is a mere stripling of ten years old.  Christmas is the Number 1 family food occasion in the UK (it’s pipped into second place by Thanksgiving in the USA) and, indeed, other religious festivals across the world have their own food particularities –  Diwali for Hindus, like our Xmas, tends towards food excess whereas Ramadan for Muslims at least tempers feasting with fasting!

Christmas is a time for giving, not least to those who need help. In the days when Christmas greetings were sent by post, the season of goodwill was an excellent opportunity for charities to sell cards with their imprimatur to support their cause. Retailers were quick to copy with, for example, Tesco Xmas cards supporting “charity partners”. The increasing popularity of electronic cards has dealt something of a blow to charity finances but all is not lost – now, the game is raised and you can support a charity at Christmas by buying sandwiches!

Prêt à Manger (purveyors of fast, healthy food in the UK, France, USA, Hong Kong, China) has linked its festive sandwich, soup and salad offers to a charity for the homeless through the Prêt Foundation Trust. Not only is it a good thing to do, but it complements their wholesome image. The “good-for-you” drinks company Innocent has been on a similar track for years with its very effective “The Big Knit” project – where customers and others are encouraged to knit little bobble hats which fit on Innocent drink caps. The cute result carries a price premium and a 25p ($0.40) donation to Age UK to support vulnerable oldies.

Pardon the pun, but now supporting charities through the sale of food and drink products, particularly at Christmas, is old hat. It’s gone mainstream and most of the grocers are into it! Want a Christmas Pud? Pop into premium retailer Waitrose and buy celebrity chef Heston Blumenthal’s one with its hidden oranges and clementines. Or to alleviate guilt, opt for the creation of another well-known chef, Simon Boyle, with his yummy pudding branded under The Social Food Company and is linked to the charity “Beyond Food” which trains disadvantaged people wanting to work in the food industry. And posh Fortnum & Mason has a Panettone from San Patrignano this Christmas which provides a donation to a charity for drug addiction rehabilitation in Italy. 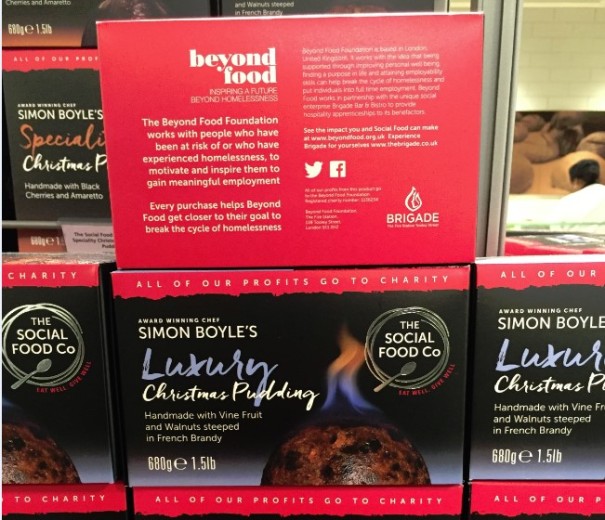 Luxury but charitable Chistmas Puddings on sale at Waitrose.

We think it’s brilliant to link the sale of seasonal delicacies with good works for those in need. Does it have a commercial pay off for grocery companies? It doesn’t have to but, likely, it contributes in some small way to presenting a more caring and less grasping image for those participating. We are reminded, however, of one of the core competences of successful grocery retailers around the world – viz. copying! Wherever we are in the world when travelling with retailers, one of the first things they will say and do after checking into a hotel is say “let’s go and look at some stores”. Out come their phones and click, click … “that’ll work well in our market”. In Canada, we were visiting the head of private label for a leading grocer and noted the one-liner scrawled on the white board above his desk: “Copy the Best Ruthlessly”! FMCG may stand for fast-moving consumer goods, but FCCG works well, too – fast copied consumer goods. Branded manufacturers are allowed to smile wryly at this point!

Happy Christmas,  A Prosperous New Year and Our Very Best Regards to You from David and Miguel.

Tagged with: Innocent, Pret A Manger, Waitrose
Posted in Credentials