Home › Discount › Mind the Gap ….. in the UK Grocery Market!

Mind the Gap ….. in the UK Grocery Market!

You’ve got to keep on your toes in the UK grocery retail industry – sneak a weekend away in Berlin on the back of your trip to Fruit Logistica and, on your return, another hard discounter has popped out of the undergrowth to nibble the nether regions of mainline supermarkets. Tesco’s Dave Lewis must be muttering “enough already” as he lowers himself gently on to his bed of nails! This time, it’s Sir Stelios Haji-Ioannou, the easyJet entrepreneur launching a trial easyFoodstore on a God-forsaken industrial estate just off the North Circular in West London.

Has Stelios spotted a gap in the market? His frank communications team say that easyFoodstore targets food consumers who are poor, likely on benefits and have, as the economists say, a very low opportunity cost of their time. Opening just 3 weeks ago, the trial store got huge publicity from the media. The shopping experience was described as “Soviet era” – stark “easy-orange” shelving, with 76 ambient products all priced at 25p ($0.35) for the opening month of February. When we visited, there was a queue with an hour’s wait to get into the store – later, the queue snaked around the corner and wait time extended to 5 hours! The store was sold out by lunchtime and closed for re-stocking in 2 of the first 5 days of opening. There are no fmcg “A” brands, just Euroshopper and Best-in private label brands available via Cash & Carry merchants.

Does this über-hard discount concept have longer-term commercial legs? Many in the grocery trade think that it’s a characteristically-clever PR stunt from Stelios, which will expand to maybe a dozen stores and, then, wither away. But the very low income, benefit-assisted, time rich income poor end of the market isn’t Scotch mist – it’s grown substantially through 8 years of economic hard times and we’d be astonished if easyFoodstore shops weren’t spotted very soon in the big cities of Northern England and over the border in West Scotland. 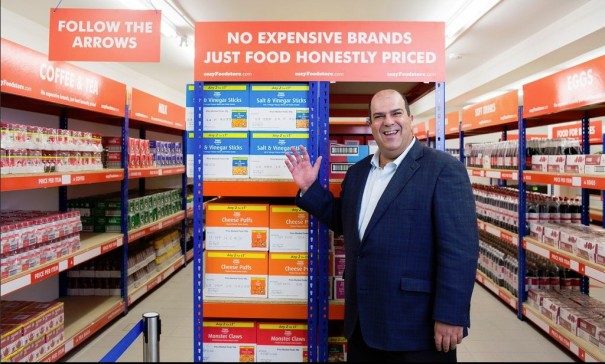 The challenge in retailing is to fill in gaps in the mental maps of shoppers’ needs. Stelios believes there is a gap between food banks (free or, at least, subsidized food for households on benefits) and hard discounters. Aldi and Lidl have earned their low price credentials and, now, are expanding premium own label to attract a higher income shopper and reward  existing shoppers wanting a treat. Look, Miguel bought his haunch of jamón Ibérico from Lidl at Christmas for an attractive price of £99.99! The austere easy-orange shops may well appeal to beleaguered shoppers who view Aldi, Lidl and even Poundland as beyond their means. We wouldn’t be surprised if Stelios capitalized on this Robin Hood-esque “friend of the poor” market position and to use end production runs, safe but slightly damaged, close to use-by-date products, etc. as exclusive offers to those who can prove their on-benefit status. In an era of savvy shoppers and bashing plutocratic bankers, there is more likely to be a “Badge of Honour” than a “Badge of Shame” associated with being a family reliant on state benefits and, as a result, shoppers can enter the orange portals of easyFoodstore with their heads held high!

Market growth in grocery is exceedingly challenging and who’d have thought that the likes of Asda/Walmart would be celebrating that its current dark days of sales downturns are close to over. The company is still losing market share – that’s a reason to celebrate?! In mature grocery markets where big supermarkets have the majority share, any new company entering, however small it may be, will nibble away at their toes and ensure that grocery retail Price Wars will remain pervasive. When Stelios launched easyJet in 1995, the established airlines (not least British Airways) dismissed it as a minor irritant. Now, easyJet has a higher Market Cap. than any of them! We don’t believe easyFoodstore is going to rock the retail boat significantly, but it will contribute in some small way to the likes of Tesco’s Dave Lewis sharpening his retail price pencil through the remainder of the decade.

Tagged with: easyFoodstore
Posted in Discount

Dr. Food Weekly Food Business Insights
Please, visit our new project, a platform about food trends and their implications for businesses: Dr. Food Weekly Food Business Insights/
Recent Posts
About the authors
Prof David Hughes: Around the world, David speaks to senior agribusiness and food industry managers about global food industry developments that are and will affect their businesses and industry. Energetic, engaging, humorous and insightful, David gains the very highest evaluations at seminars, conferences and Board level discussions in every continent he visits. Miguel Flavián: works for several Spanish organisations and companies to help them to learn from the developments of the British grocery market and improve their business back home.
%d bloggers like this: