Should we shoot Tesco and put it out of its misery? We don’t think so – it’s far from being a basket case and is doing everything it can to revive and thrive and be the leading light in UK and international grocery retailing.

Three years ago, Tesco bought the trendy coffee chain Harris + Hoole and Giraffe the family restaurant business in an attempt to “sex up” the big box shopping experience and with mixed success (closing some of the coffee shops recently). Look, dragging the family around a Tesco Extra isn’t an uplifting experience, so, maybe the attempts to add some excitement to big box shopping is akin to putting lipstick on a pig (it’s still a pig/big box!).

More recently, Tesco have provided space for food service concessions in Tesco Extras like the NY style deli-diner Fred’s Food Construction and Decks family restaurants. In late-March, Tesco is trialing an “In Farm We Trust” food-to-go concession in its Goodge Street Metro store, London. The food is British, with provenance and offers gastro-pub grub at very affordable prices (e.g. fish pie on a Friday, slow-cooked beef cheek stew on Tuesday). Farmers, fishermen, bakers and butchers are the heroes! The menu and ingredients are very much “on-trend” – simple, classic, natural but served at speed to satisfy the “want it now” requirements of the customers. Two “Burrito-Kitchen” concessions are opening in April in Tesco stores, too. 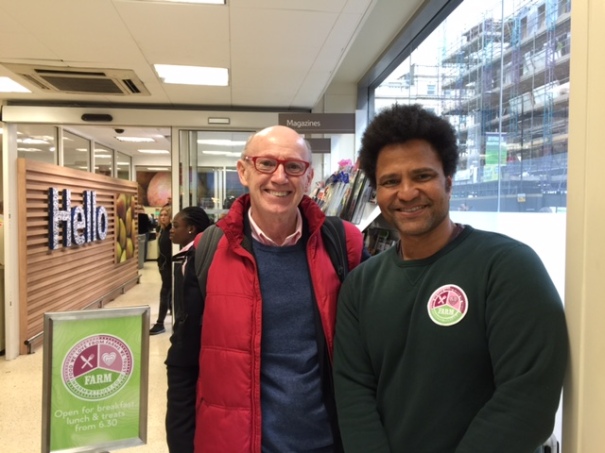 Professor David Hughes and Dom Kamara, one of the entrepreneurs behind the FARM concept. 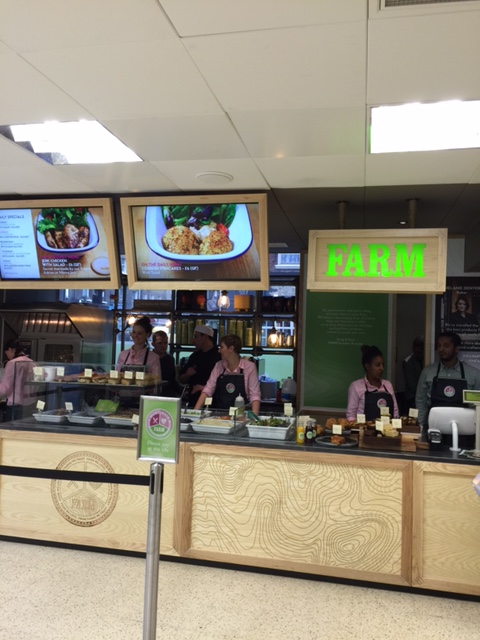 FARM, a foodservice outlet inside the Goodge Street Tesco Metro.

Does an in-store food service offer complement and build traffic for the retail store overall? Maybe for a Tesco Extra but probably not for the grab & go Metro stores. However, the Metro stores have a different function: located downtown next to offices, customers may visit 2 or 3 times a day – popping in for breakfast stuff in the morning, picking up lunch mid-day and grabbing dinner requirements in the evening. Clearly, the Metro stores are hybrid food retail and food service. In the Goodge Street store at lunchtime, there were 100+ customers being whisked through the checkouts with most holding food and drink that would be consumed within minutes of purchase.

The Tesco turnaround won’t be overnight. But, the big ship isn’t doomed and all hands are to the pumps! In a hyper-competitive grocery retail market, Tesco are happy to take “share of stomach” from food service operators to compensate in part for the lost retail sales to the hard discounters. Clearly, food retail and food service is converging as consumers forsake the traditional 3 meals per day pattern and opt for a succession of mini-meals/snacks.  It was always a Tesco mantra to follow the customer and her money!

Dr. Food Weekly Food Business Insights
Please, visit our new project, a platform about food trends and their implications for businesses: Dr. Food Weekly Food Business Insights/
Recent Posts
About the authors
Prof David Hughes: Around the world, David speaks to senior agribusiness and food industry managers about global food industry developments that are and will affect their businesses and industry. Energetic, engaging, humorous and insightful, David gains the very highest evaluations at seminars, conferences and Board level discussions in every continent he visits. Miguel Flavián: works for several Spanish organisations and companies to help them to learn from the developments of the British grocery market and improve their business back home.
%d bloggers like this: